WORth its weight in gold dinners

Food and community share a clearly demarcated connection, a common ground where ideas, stories and good feeling can pass among strangers and friends alike. Worth Its Weight In Gold comprises three dinner events. Designed to bring people together under the banner of regional internationalism, these long table dinners explore the idea that we are all connected to a local community that is also international.

The three course dinners will be held at Moana Project Space and Moana Coffee-Balcony Cafe, 1F 618 Hay St, Perth. Each night will feature a guest speaker and two artists speaking about their work. Our guests are people who have exceptional stories, knowledge and experience in their fields and a keen interest in rural industries and community.

DINNER 1
Monday 12 May 2014
Megan Christie will give a toast on ten lessons learned from sheep.
Geoff Overheu and Abdul-Rahman Abdullah will inform us of the stories and intention behind their work.

DINNER 2
Wednesday 14 May 2014
Ross Johnston will take us on a journey of sheep farming from New South Wales to Afghanistan.
Roderick Sprigg and Valdene Buckley will let us in on the histories and intricacies of their work.
​
​DINNER 3
Friday 16 May 2014
Professor David Lindsay will educate us on alternative sheep sciences.
Paul Caporn and Anna Louise Richardson will enlighten us on their practices and import of their work.

All food will be locally sourced, happily grown and lovingly prepared by our cook, Helen McHugh, with the aid of production angel Julia Richardson.

DINNER 1
Monday night we were graced with the company of 12 guests from the art industry and the rural industry. It went off with a bang! ​ 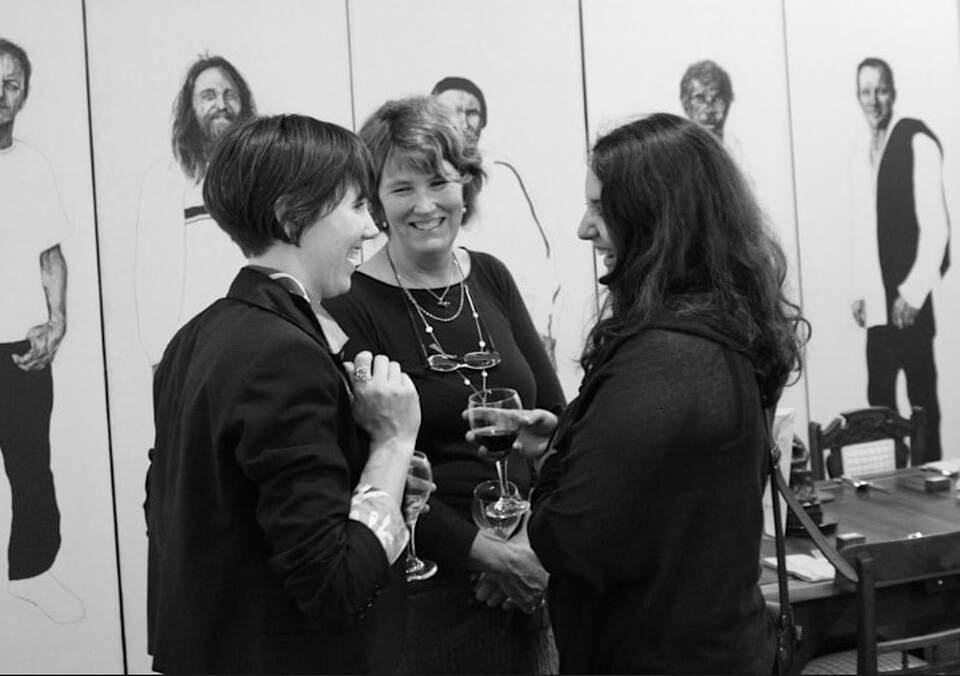 Anna Louise Richardson, Megan Christie and Martine Linton admiring something, or finding something hilarious. In any case they had a great time.
After drinks and meet and greet in the gallery we found our seats and were served a first course of tomato and basil soup with cheesy sheep biscuits.

Once the plates were scraped clean and the sheep decal revealed on the bottom of the bowls we heard from Megan Christie, the talented artist responsible for creating the dining table and chairs.

Megan is a farmer, veterinarian and most of all a highly skilled artist and fine furniture maker. Her works go way beyond the purely functional incorporating an impressive ethos and strong conceptual base that is quirky, and sometimes very colourful, but always perfect. She has received many accolades for her work including State and National Furniture of the Year Awards.

Megan shared with us some lessons we can all learn from sheep. ​ 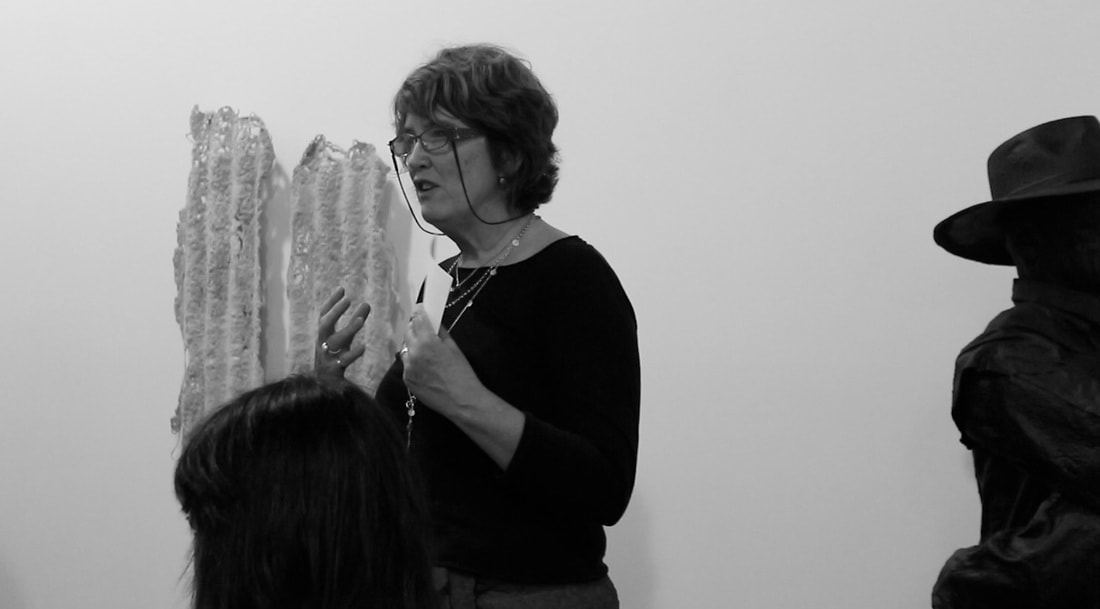 Megan Christie enlightening on us how the humble, bloody, will-to-die sheep might actually be able to teach us some life lessons.
After a main course of delicious lamb, care of Macabee Dorper Lamb, potato bake, peas and carrots we heard from artists Abdul-Rahman Abdullah and Geoff Overheu about their work.

Abdul-Rahman is an emerging artist on a war path. Since graduating in 2012 he has had a hugley successful solo show at Venn Gallery, Perth, exhibited in many group shows including Project HOME with his brother Abdul Abdullah as part of Underbelly Arts Festival 2013, Sydney and received the Qantas Foundation Encouragement of Australian Contemporary Art Award in 2014. He is currently working towards the Melbourne Art Fair 2014 with Dianne Tanzer Gallery + Projects, and more locally, Tropeum at Fremantle Art Centre, Perth. 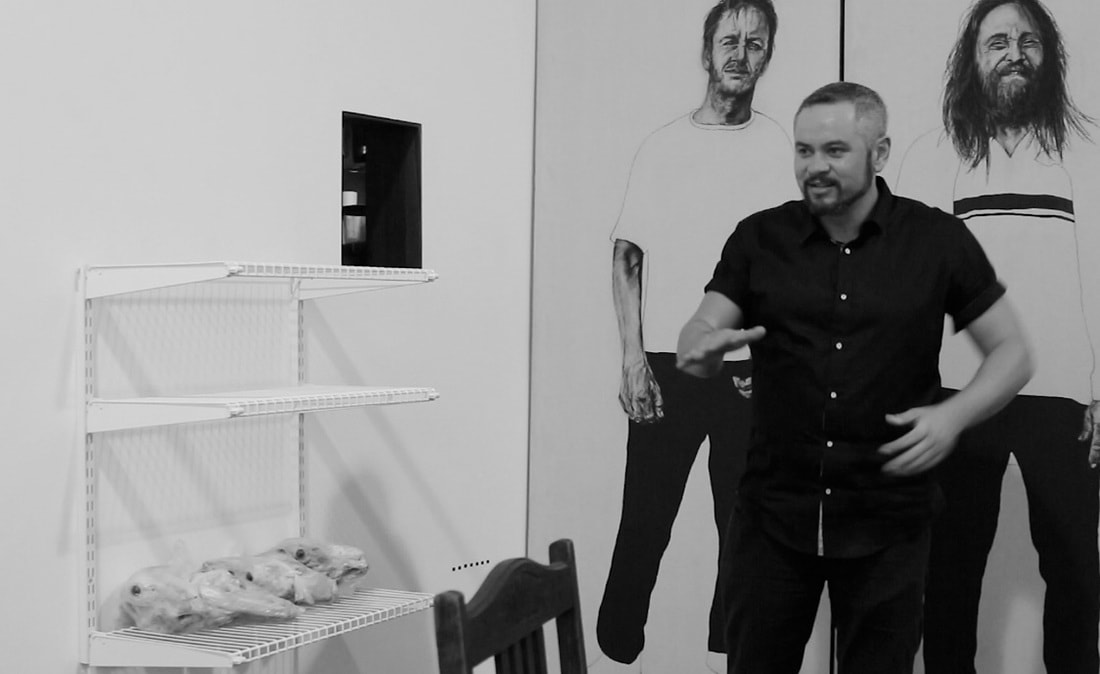 Abdul-Rahman Abdullah explaining how his dad skinned sheep heads, or getting excited that you used to be able to buy a sheep for $5 from Welshpool, WA.
After a round of questioning Abdul-Rahman why his very realistic sheeps heads were not in the freezer we heard from Geoff Overheu via live feed from China, where he is undertaking a residency at Red Gate, Beijing.

Geoff is a farmer and artist working out of Gingin, WA. He exhibits regularly with Turner Galleries and is strongly attached to the rural ethos, often exhibiting regionally in an effort to break the perception that you need to be in the city to be successful. His work draws on his experience as a farmer and discusses masculine identity politics, symbolism, irony and exactly what it feels like to be out on the land on your own. ​ 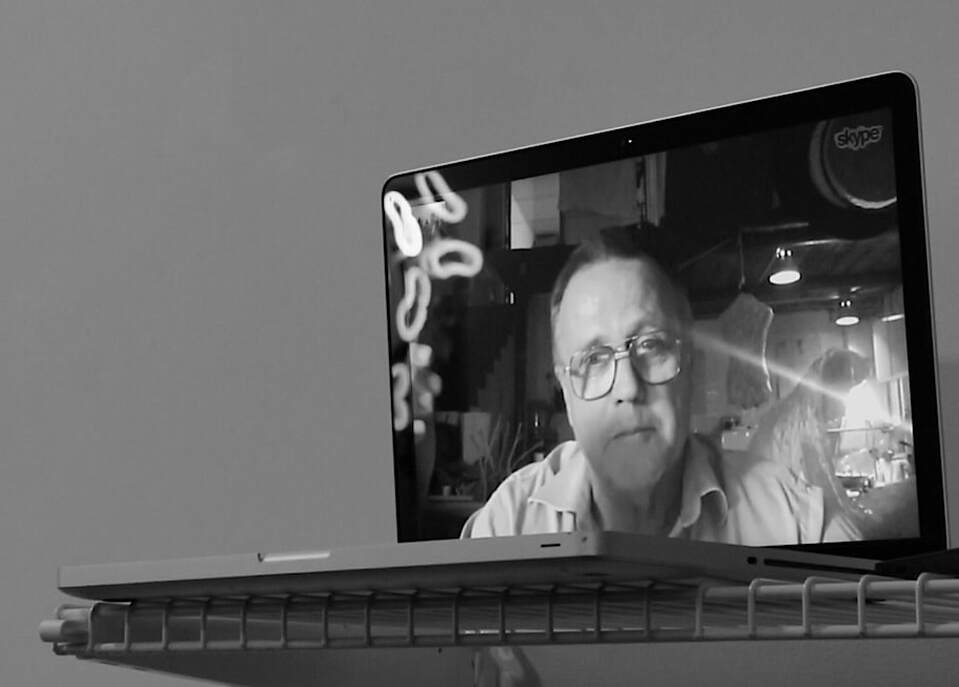 Geoff Overheu taking us on a journey back to the bloody hot shearing sheds 15km east of Dalwallinu, WA via the wonders of the internet in Beijing, China. That's a headspin!
After these fantastic talks we were invited to move the party into the cafe where a scrumptious dessert of pavlova, macadamia and honey tart, rhubarb crumble, espresso coffee and tea was served.

At the end of our revels, we said our thanks, our congratulations and went our separate ways into a night of happy sheep.
​
DINNER 2
After a breather of one day we were at it again, this time welcoming 12 new guests to share the Worth Its Weight In Gold table.

After the how-do-you-do's and kisses, glasses of wine and opening of catalogue gift packages we found our seats guided by gold engraved name blocks made from the remnants of the wool table.

Warmed and satisfied by delicious soup we settled down to hear from guest speaker Ross Johnston.

Ross is a man of many talents. Born and raised on a farm in rural NSW, he is an Aid Worker, the head of Africa Water Bank in Australia, and has worked all over the world for the Red Cross and the UN, as well as spending his early years as a Jackaroo and a park ranger, famously introducing ABBA to a wombat on live television. He has also worked extensively with Aboriginal communities, including involvement in the historic land rights cases around Uluru.

Flying over from Sydney just for one night, Ross shared with us stories from his life where sheep played a part. 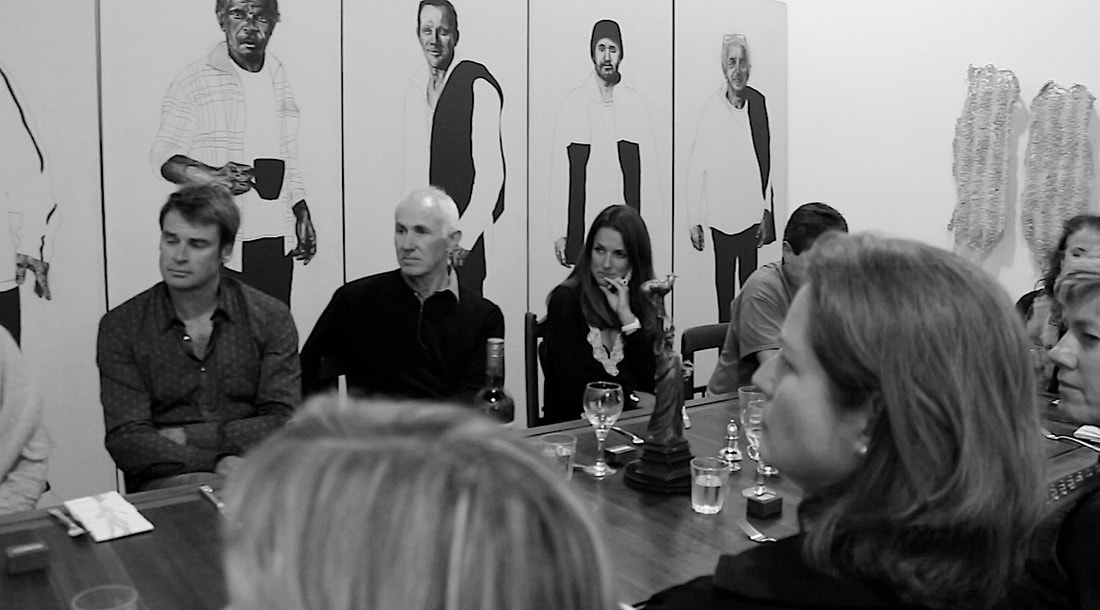 The Worth Its Weight In Gold guests listening very seriously.
After Ross' talk the atmosphere of the evening changed, becoming closer, more familial and many personal stories were shared, lamb was devoured and wine imbibed.

We then heard from Valdene Buckley and Roderick Sprigg about the stories from their lives that have heavily influenced their work.

Valdene is an emerging artist who was included in the Hatched graduate showcase at PICA, Perth earlier in May. Her work incorporates rural materials, rustic themes and personal narratives to create exquisitely sensitive and delicate compositions.

Some of you may not know, but Valdene is also responsible for the lamb marinade recipe. 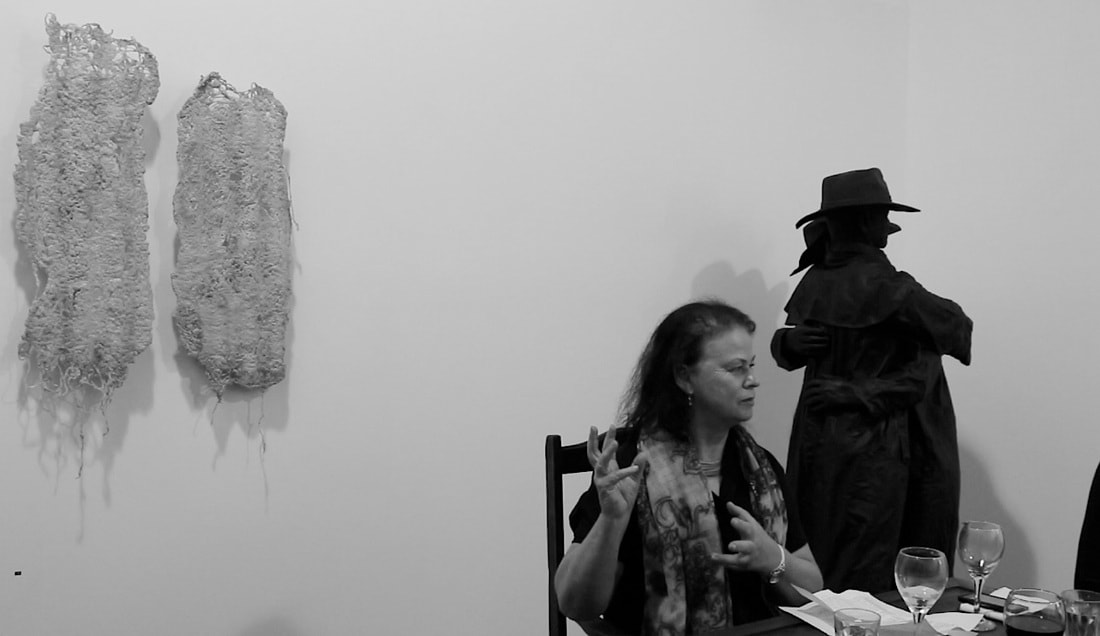 Valdene Buckley attempting to blend in with Geoff's sculpture, or gesticulating the spinning of wool.
After much questioning and elaboration on her life's story and the process of washing, carding, spinning and knitting wool we then heard a heart wrenching story about Australian rural history from Roderick Sprigg that is very personal.

Roderick lives in Leonora, and works as an artist, truck driver and farmer. He has exhibited as part of Primavera in 2009 and won the Joondalup Invitational Art Award in 2011. His work is often participatory and community driven, exploring masculinity in rural communities. His work, The Lamb Fostering Project explores how people relate to produce, animals and each other. ​
After another scrumptious dessert in the cafe, hot coffee and warm hugs were had by all and we departed feeling like we had entered into a new kind of community, one that brings Sydney, South Australia, Perth and Leonora just that little bit closer together.
​
DINNER 3
The last shebang welcomed an entirely new group of revellers to our table. Tipped in favour of rural industry and regional characters this round of feasting was rather educational. 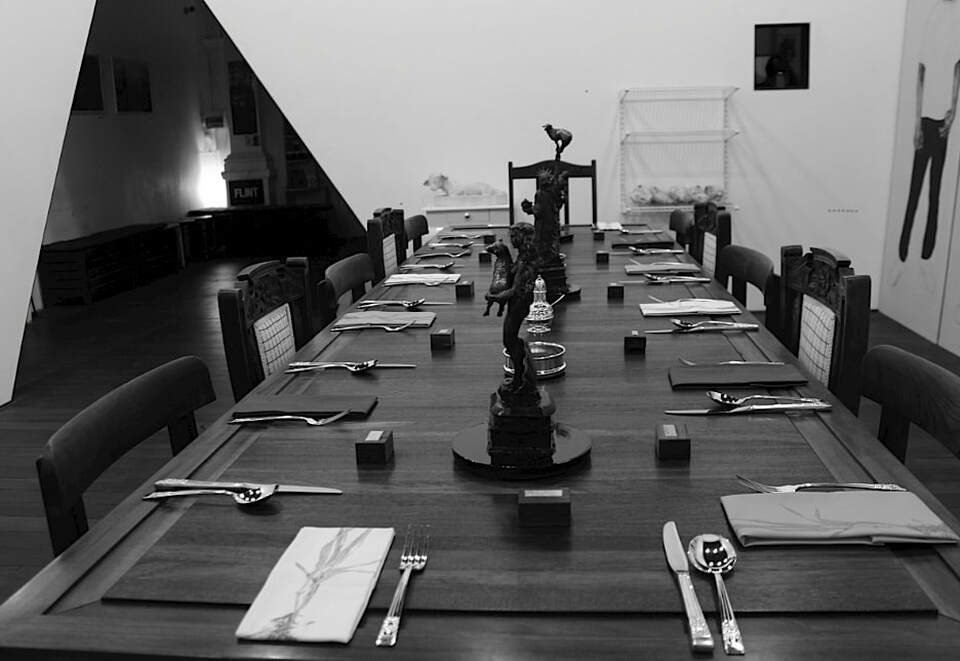 The Worth Its Weight In Gold table lying in wait.
After a once again delicious entrée we settled down for an anatomy lesson on the social lives of sheep by Professor David Lindsay.

David was the Dean of Agriculture and the head of the Department of Animal Science and production at the University of Western Australia for over 20 years. He has also been the Deputy Director of the Cooperative Research Centre for Premium Quality Wool and Manager of its education program. These experiences coupled with a background as a farmer place David is a perfect position to speak about the history of the sheep industry and specifically the wool industry in WA. He has been at the forefront of new technological and genetic developments such as mechanical shearing and specialised wool production in sheep. ​ 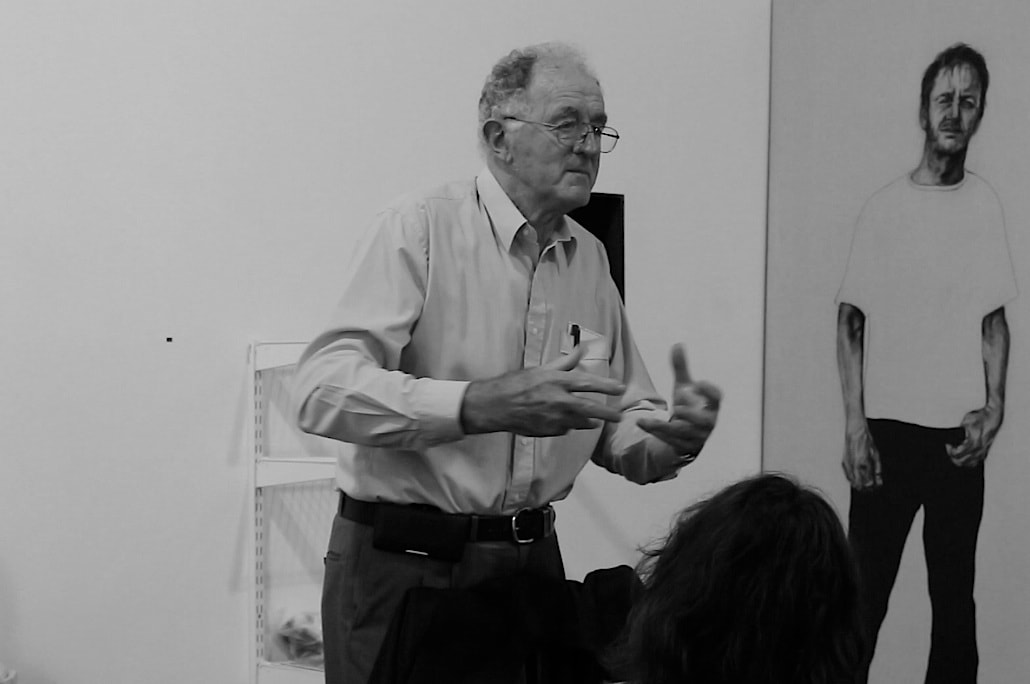 David Lindsay demonstrating the approximate size and shape of sheep testicles
After learning more about sheep testicles then we ever thought we would at a formal dinner party we tucked into the main course of, you guessed it: lamb.

Unperturbed by the talk of expanding testicles, the meal was a great success and guests were treated to artist talks from Paul Caporn and Anna Louise Richardson.

Paul is an established artist with an impressive career, having exhibited nationally and internationally in over 40 group and 9 solo exhibitions. He primarily works with sculpture, animation, video and installation, exploring the pastimes of the Australian bloke. It is humorous and nostalgic, referencing the tools and machinery encountered in masculine work, sheds and dad’s old collections. His work is highly refined and exquisitely composed, drawing the viewer into a world of dusty sheds, memorabilia and stories touched with irony and a sense of the ridiculous. He is a superstar, having received various grants from the Department of Culture and the Arts and the Australia Council whilst also being selected for the Asia Link Visual Arts Residency and the Basel Arts Residency, moving to Basel, Switzerland for six months from June this year.     ​
We then heard from Anna, the curator and a contributing artist in Worth Its Weight In Gold. 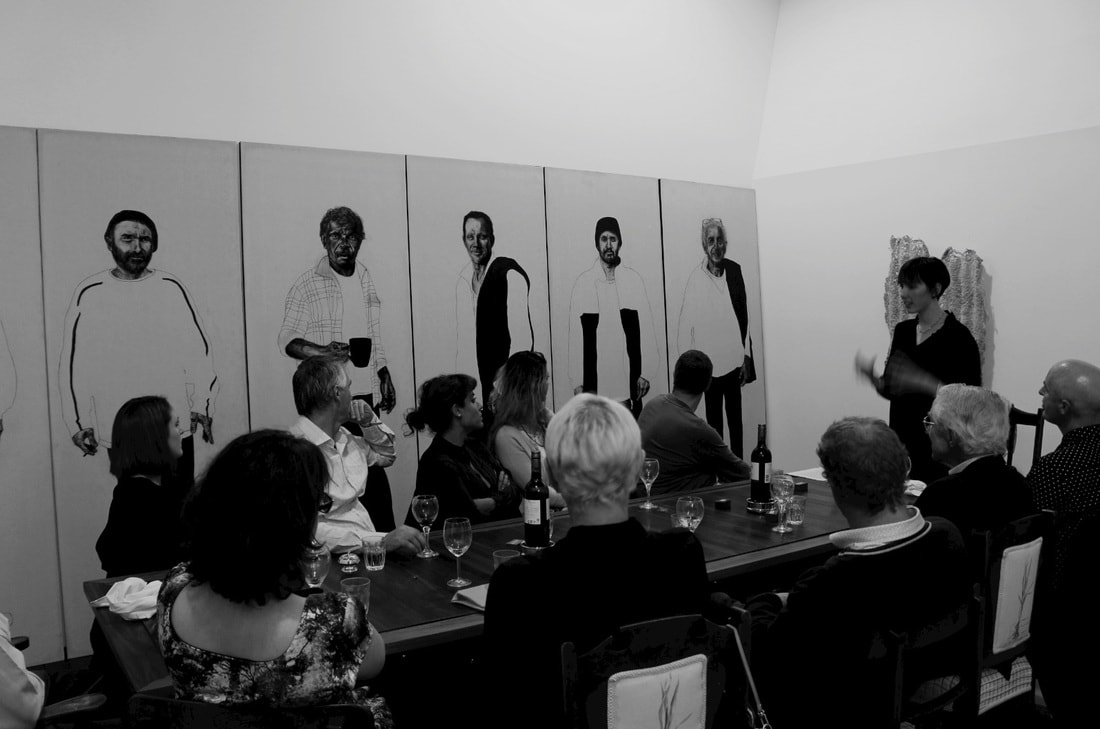 Anna Louise Richardson elucidating the origins of Worth Its Weight In Gold
This project, including the exhibition, the dinner events, the food, the artists, the guests and the fantastic catalogue are all the results of her hard work and dedication in building a project that would fulfil her unique vision of what an exhibition of contemporary art could be. Anna successfully applied for two grants in order to produce Worth Its Weight In Gold, a Young People & the Arts Development Grant from the Department of Culture and the Arts as well as a City of Perth, Arts & Cultural Funding Grant. Graduating from the Curtin School of Art at the end of 2013 she is currently studying a Masters in Cultural Conservation at the Melbourne of University, while working at Artsource Fremantle as membership co-ordinator. At just 21 years old Anna has started building a career as an emerging artist, curator and organiser who doesn’t take no for an answer!
And so, we come to the end of the night, closing with mounds of pavlova, rhubarb crumble and mugs of coffee.
As the kitchen packs up and the cafe is returned to normal, the guests linger, not wanting the night to end.

Sadly it does, but the experiences of the past three nights of feasting and talking down the cultural barriers between urban and rural will not disappear.
The left overs however will, devoured by the Worth Its Weight In Gold team. ​ 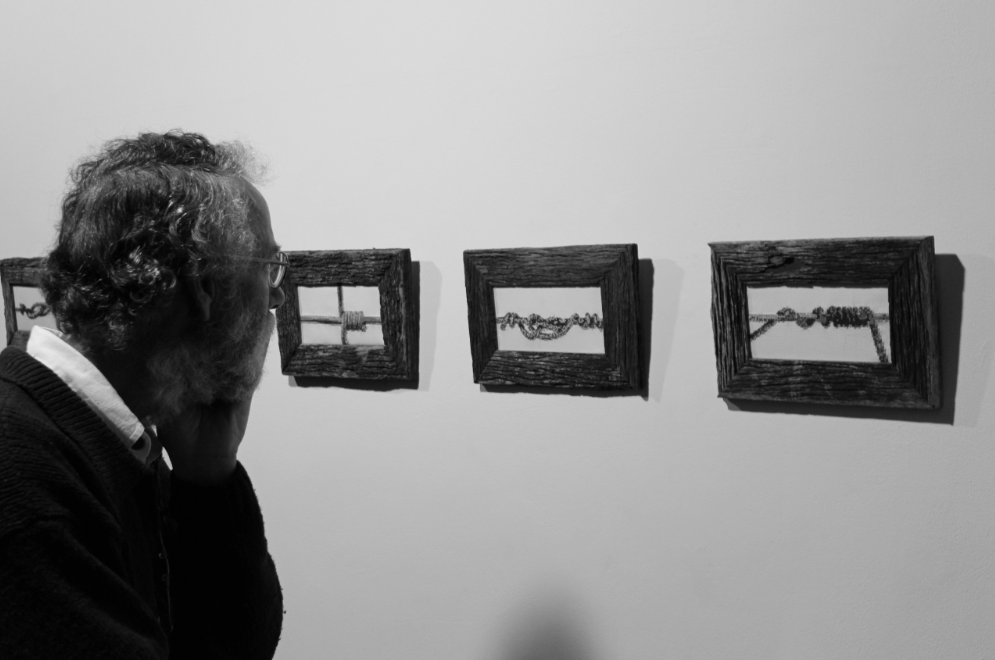 Trevor Bunce inspecting some fencing knots. There is something a bit funny about them.
The Worth Its Weight In Gold Dinners are supported by Macabee Dorper Lamb, David Mullen Wines and Moana Coffee.